Shifting The Forecast Of A Potential Disaster Into A Formula For Opportunity and Success! 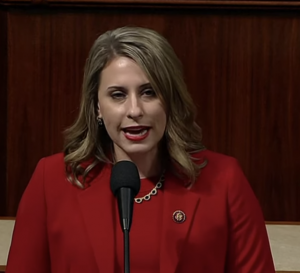 Katie Hill recenty resigned from Congress over what she calls a "double standard." Because one of my primary functions is to remain neutral, I have no comment regarding her actions other than to review Katie's cards based on her birthday as it relates to her present experience.

Katie Hill's birthday is August 25, 1967. She is an Ace of Clubs/Queen of Clubs. Katie is very smart, very ambitious and has the ability to accomplish a great deal over and over again! According to her cards, she is a wonderful multitasker.

If Katie had been my client, a reading would have forecast what was coming and we could have cleared it beforehand for a very different outcome. She could have avoided the "bottomless disappointment" she just experienced!

The Jack of Spades is a rip off card; actually it’s "the" rip off card in this position. It warns one to be on the alert for deceptive intentions from family. She could be exposed to some new information… And she was definitely exposed.

She also had the Nine of Hearts during this period which is the major divorce card. Katie is in the middle of a divorce. Because of where it’s placed it could harbor a sudden disappointment with a loved one. She may have misjudged someone which could prove costly financially and in many other ways. Heartache at this time will help her in the future. The Nine of Hearts definitely creates an emotional challenge or ending in her life.

If Katie had been my client we would have cleared all of the above archetypes as they are quite a recipe for disaster and instead activated the positive aspect of each!

Her long range and her challenge for the year is the Five of Clubs which signals moving in a new direction because circumstances may suddenly appear to upset her previouus trajectory.
According to her cards, external changes will mirror internal changes on her basic philosophy of life this year. A change of philosophy could cause her to abandon much of what she’s known for the past five or 10 years; even many of her friendships. She is in the mist of a transition that could affect her entire life. This seems to be so!

This transition will only be as difficult as the negative remains active and the positive is not enhanced through a clearing. A clearing would still be very helpful!

She also has a Seven of Clubs in Pluto which indicates she will be handed a major challenge in her life. Seems this has been the case! OR, in the alternative, she could have been exposed to new knowledge that is uplifting and transformative aligning her with the opportunity to accomplish new goals!

A clearing would have assisted her to release old attachments so that she could have generated a new path forward. If I had done a reading for Katie Hill, I could have cleared the way for shifting her potential from disaster to great success!

Every archetype in the card system has a positive and negative potential. When we do a clearing, we diminish the negative and enhance the positive. And the client gets a far different outcome!
This is not just for Katie Hill but anyone who wants to upgrade their experience.

We can do this for you!